"People, people who need people, are the luckiest people in the world."
- Bob Merrill - 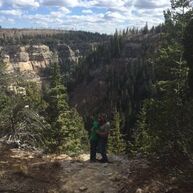 ​LEAD POISONING  AND  THE CALIFORNIA  CONDOR

California Condors are among the rarest birds in the world. In 1982 there were only 22 California Condors left in the world. Today there are nearly 500 – more than half of them flying free in Arizona, Utah, California, and Baja Mexico. This has been the result of a great cooperative effort between the Peregrine Fund, the US Fish and Wildlife Service and the Divisions of Wildlife Resources from the states of California, Arizona and Utah.

There is still much work to be done before the California Condor can be removed from the Endangered Species List. Today, Condors die for a variety of reasons, but the biggest preventable cause of death is lead poisoning. In fact, half of all deaths are due to poisoning by lead fragments that condors ingest when scavenging on remains of animals, like deer, that have been harvested with lead-based ammunition.

Recently the Peregrine Fund has been capturing condors in Arizona and the testing their blood for lead content. If the lead levels are too high the birds are sent to a center for treatment. Every condor is radio tagged and tracked so that trends in their exposure to lead and their behavior in the natural environment can be better understood. With the help of Alpine resident, Brian Higbee, this program has now been expanded to Southern Utah. 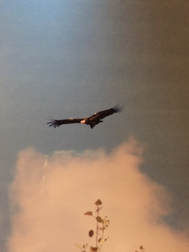 Brian and his family own and manage approximately 800 acres of wild area southeast of Cedar City, Utah. With a 800 foot deep canyon that has a creek running through the eastern side of the property, it has become a gathering place for California Condors in southern Utah. Due to the ability to track condors through tagging, the Peregrine Fund showed that Brian's property has one of the highest concentrations of condor activity in the world. Brian's interest condors started years earlier. In his words:

"About 3-4 years ago Vicki (Brian's spouse) and I were walking in the woods on our property about half mile from the canyon when a HUGE condor (9’ wing span) flew over us. Condors are not only huge but they are beautiful in flight with their distinctive large white streak going down the middle of each wing. Weeks later I was reading the newspaper and saw where about 6 condors had died from “lead poisoning” from ingesting particles of lead bullets in dead animals.

​Such a small population base cannot survive and condors future is terminal with this high of loss plus normal mortality from disease, accidents, old age, etc.. I had to know more. Called and spoke with the DNR office in Cedar and found out the my math was right and they were also alarms. A period of time later I received a call from the US Fish and Wildlife service in Cedar City and invited me to a special meeting with them, the Division of Wildlife Resources (non-game division), Chris Parrish from the Peregrine fund, and others."

During these meetings Brian learned of the efforts of the Peregrine Fund in Arizona - capturing condors, testing for lead poisoning and, if necessary, treating them. The team was formed for the introduction of the program into Utah:

"I suggested that they construct a pen on our place and get these birds tested during and after the hunting season before they take off for warmer areas and die on the way. Last fall (2016), with the help of many scientists and agencies, we finished the site."

On the last day of constructing the site, KUTV, Channel 2 in Salt Lake City, spent the day with the team. Click here to see their report. ​ 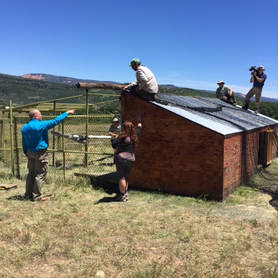 During the fall of 2016, 16 California Condors were trapped, tested and released.  A video was made of the release of the first seven condors trapped and tested. The Peregrine Fund and the team are setting things up for a bigger effort in the Fall of 2017.

Brian has been thrilled with progress to date:
"This has been an honor and privilege to be a tiny part of this great effort to save the rarest bird in America. I personally know that you and I can also each make a difference in making Alpine a very special and beautiful place as we learn to live in harmony and be just a little more giving, tolerant, and loving."
​More information on this project and others, click here to access the Peregrine Fund website.