All points bulletin - in search of the California Poppy 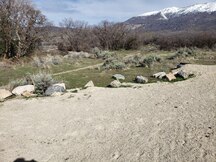 South Parking Area - Where the poppies used to grow.
There are only two places where we knew the California Poppy grew in or about Lambert Park. And, alas, each of these areas is no more. The first area was in the water retention area of the new Lambert Park Estates subdivision. That area has been regraded and the poppies have been lost. The other area was on the south side of Lambert Park by the bathrooms. But, alas, this area has also been graded to accommodate the new southern parking area of the park.

So if anyone spies one of these beauties in another area of the park - give us a heads up and drop us an line at alpinenaturecenter@gmail.com. In the meantime, let's learn a little about the California Poppy: 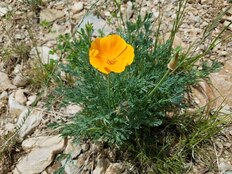 It's a Beautiful Flower
​The California Poppy, the state flower of California, is native to the Pacific slope of North America from Western Oregon to Baja California, and it grows in many parts of the United States. Adelbert von Chamisso, naturalist aboard the Russian exploring ship "Rurick”, discovered and named the species. Chamisso named the California poppy Eschscholzia californica in honor of J. F. Eschscholtz, the ship's surgeon and entomologist (note that he accidentally left the “t” out of Eschscholtz’s name).

California Poppies have been planted in most of the United States and have become established along roadsides, in empty lots, and other disturbed places. In California, it is hard to tell any more which poppies are native wildflowers and which are garden escapes.

California poppies are easy to grow. In hot summer areas, the poppies will bloom in spring and early summer, and then the tops will die back and the plants become dormant during the heat of the summer. The poppy survives in the form of a fleshy taproot. In cooler coastal climates, California Poppies may bloom most of the summer. In mild-winter climates, these poppies will survive years, resprouting each fall. Where winters are cold, like in Utah, the poppy behaves as an annual, renewing itself from seed each year.

The flowers of California poppy close each night, and on cloudy days. Enjoy them where they grow. If you pick California poppies for a wildflower bouquet, you will be disappointed when the petals almost immediately fall off!